A full week of business networking, emotions and competition. This is what was experienced during the twenty-second edition of the World Corporate Golf Challenge World Final, the culmination of the world’s largest network of corporate golf days, where the National Winners from over 30 countries came to Cascais to compete.

Executives from companies such as Kuehne + Nagel Group, Siemens, Deloitte, Samsung Electronics, Bankinter and PwC played the World Final where they were representing both their company and country.

Commenting on the success of WCGC, José Guerra, chairman of the WCGC, said: “We are delighted to have brought the World Final to the spectacular coast of Lisbon and in particular to Cascais which offers beaches, quaint villages and pristine forests. Cascais and Estoril are must-see destinations for any visitor to Portugal. Some of the best golf courses in Europe are located here, including the headquarters of the this year’s World Final, Oitavos Dunes links, considered one of the top 100 courses in the world, voted #65 in the world in 2013 by Golf Magazine. The golf course has offered a true ‘professional’ golf tournament experience to all of our competitors and guests.”

Miguel Pinto Luz, First Deputy Mayor of Cascais, commented: “Through what we have and what we are, we work to convert Cascais in to the best place to live, if it is a day or a lifetime. Accompanied by the charm of the Atlantic Coast, we are sure that we’ve managed to convince all participants, guests and sponsors that we are one of the best places in the world to play golf.”

The ‘Road to Cascais’ was the result of more than 150 events throughout more than 30 countries. Although all teams competed valiantly to become World Corporate Champions, there could only be one winning team lifting the trophy at the end of the week (designed and produced by Vista Alegre), and that honour fell to the team from India.

The week was officially opened by our License Holders and Guests, who had the opportunity to see first hand the Oitavos Dunes links, the course on which the competitors would be competing on.

The Official Competition, with thirty-two teams began on Thursday July 2 at 9,00h, with Spain and New Zealand being the first to tee off.

After two days of hard competition between the teams, on the second best golf course in Europe, the Indian team from Ramesh Swiss Watches, represented by Sonam Chugh and Shashidhar Reddy, were crowned as 2015 World Corporate Champions.

Players and guests had the opportunity to share experiences with WCGC Official Ambassadors. Golf legend Tony Jacklin hosted ‘An Evening with Tony Jaccklin CBE’ held at the Casino Estoril, where he shared stories about his career as a professional golfer.

Ronan Rafferty and Manuel Piñero, were the captains of the teams that played in the Corporate Cup.

Simon Holmes, one of the most successful golf coaches in the world helped participants to improve their game throughout the week.

Finally, Jeremy Dale was the delight of all attendees with his Trick Show: a great show that was enhanced by the addition of WCGC Ambassadors taking part. 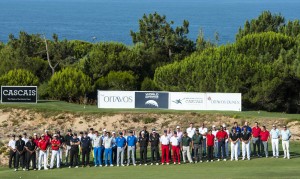